You have two different options how to get to Palestine / West Bank. Having done both options, we will describe to you all the details and provide some helpful tips that may be unknown to you before travelling to Palestine. In general, it is not so different from travelling to other countries in the world.

Option 1: By plane through Tel Aviv

Take a flight to Tel Aviv (Ben Gurion Airport) is definitely the easiest option you can chose. Many well-known airlines, such as Lufthansa, British Airways, Air France, Ryanair, Easyjet, etc. nowadays operate daily flights to Tel Aviv from all major cities in Europe. 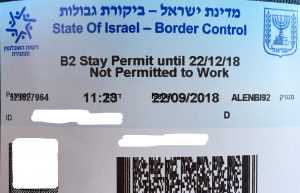 Upon arriving at Ben Gurion Airport, the immigration procedure is very much the same to what you probably experienced in other countries. There you will receive your visa / stay permit (see picture on right) that is valid for 3 months for travel within Israel and Palestine / West Bank.

Tip: if you also plan to visit Israel, you may not want to be too explicit about your plans to visit Palestine / West Bank as this might trigger some additional questions from the immigration officer.

Although you can enter Palestine / West Bank through multiple Israeli checkpoints, it is easiest to first go to Jerusalem and continue your journey to other Palestinian cities from there.

From Ben Gurion Airport, you can get directly to Jerusalem either with a shared taxi or a private taxi. The shared taxi is definitely the cheaper option (60 Shekels/NIS equivalent to 14 EUR or 17 USD per person), but should you wish to take a private taxi instead, let us know and we are happy to organize one for you.

You can find the shared taxi, called Serveece, (look out for yellow minivans) outside the arrivals hall at Ben Gurion Airport. The driver usually waits for the minivan to be full before he sets off, but this mostly does not take very long. In case you plan on staying in Jerusalem, make sure to tell the driver the name and address of your hotel / accommodation. If possible, he will make sure to drop you off exactly at your desired address. Otherwise, he will take you to Damascus Gate in Old Jerusalem, where you can find taxis that will take you to your accommodation in Jerusalem.

Tip: Although rental car companies do exist in Palestine, we would not recommend it as the roads connecting cities are not shown on Google Maps / GPS and the Serveece option is a very safe, reliable and cheap mode of transportation. Plus you get the chance to meet and talk to Palestinians in the Service. They always enjoy talking to foreigners.

Option 2: By land from Jordan

Although there are different border crossings from Jordan, the only one that gets you directly to Palestine / West Bank is the King Hussein Bridge crossing. In comparison to entering through Tel Aviv, this option is  more burdensome and requires quite a bit more time. 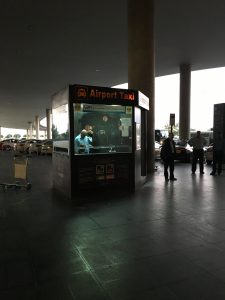 Arrival at Amman Airport (Queen Alia International Airport)                                Outside the terminal building, you find a small ticket counter for airport taxis (see picture on the left). Make sure you get the taxi from there, as other taxis can usually not be fully trusted. A taxi to the King Hussein Bridge costs 34 Jordanian Dinar (42 EUR or 48 USD). The journey roughly takes 1 hour. After driving a while on the main highway, the taxi then descends towards the Dead Sea. After passing a couple of smaller villages and larger areas of date palm and other agricultural plantations, you arrive at the King Hussein Bridge. Upon your arrival, you need to take the following steps:

Arrival at the Jordanian border 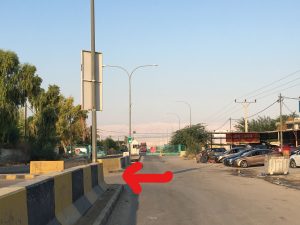 Go to the terminal building (indicated by the red arrow on the picture on the right). In case you have problems finding the terminal, do not hesitate to ask somebody. Once you arrive in the terminal area, look for the departure building.

In there, you find counters for tourists / foreigners and Palestinians. Make sure you go to the counter for the tourists (see picture below). Usually, you can identify the right counter by the looks and spoken language of the people queuing there. Once it is your turn at the counter, pass over your passport to the immigration 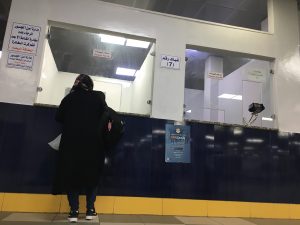 Shuttle bus between Jordanian and Israeli border
The shuttle bus leaves every 1-2 hours. On the way to the Israeli border, the bus will stop at several security checkpoints. That’s why the journey of 5 km takes about 30 minutes. The fee for the bus is 7 Jordanian Dinar per person (8.50 EUR or 10 USD) and 1.50 Jordanian Dinar (1.75 EUR or 2 USD) per piece of luggage loaded in the bus trunk . Both fees are collected of you on the bus.

Arrival at the Israeli border

Once the bus arrives at the Israeli terminal (see the picture on the left), pick up your luggage from the bus trunk and enter the terminal building. After going through an initial passport control, you enter a security and luggage check, similar to what you usually face at an airport. Once completed, you then proceed to the immigration hall, where you have to queue at the immigration counter to get your visa. After checking your passport and asking a couple of questions about the reason for your stay, the immigration officer passes back your passport together with your visa / stay permit on a separate piece of paper (see picture on the right).

The permit was introduced a couple of years ago to replace an Israeli stamp in the passport, as this usually caused problems when travelling to other Arabic countries. Make sure to carry this permit together with your passport at all times during your stay in Palestine and Israel.

Tip: Sometimes, your passport is held back by immigration for no obvious reason. If that is the case, just follow their instructions and answer their questions. Try not to question their procedures too much (it’s not worth it), as this can sometimes lead to extra delays and safety checks.

Outside the Israeli terminal

After leaving the terminal, you find a mini bus to Jerusalem. The only option is Taxi Al-Nijmeh (see picture on the left). The ticket costs 42 Shekels (10 EUR or 12 USD). You can get it at a stand close to the mini bus. The journey to Jerusalem roughly takes 30-45 minutes. The driver waits for the bus to be full before leaving.

If you want to go to other Palestinian cities instead, such as Bethlehem, Ramallah, Hebron, Nablus, Jericho or Jenin, you need to take a different bus (operated by Abd Elhay Shaheen Buses) to the Palestinian border close to Jericho.

The buses are easy to recognize because of their red color (see picture on the right). Buses run every 10-15 minutes. The ticket for the bus can be bought for 10 Shekels (2.50 EUR or 3 USD) from a stand outside terminal building. Once you arrive at the Palestinian border, you will see many shared taxis (mini buses), also called Serveece. These taxis (always orange color) go to the different Palestinian cities. Make sure to ask somebody for the right taxi to where you want to go. A trip from there to Nablus costs you 35 Shekels (8 EUR or 9.50 USD) or to Hebron or Ramallah 50 Shekels (12 EUR or 13.50 USD)

The whole border crossing from the Jordanian border terminal until exiting the Israeli border terminal can take anything between 2 and 5 hours. It is certainly not a very pleasant and time-efficient experience. Hence, if you have the choice between these two options listed here, rather go with the first one through Tel Aviv Ben Gurion airport.

For more information, go to: http://www.iaa.gov.il/en-US/borders/alenbi/Pages/default.aspx