Nablus is also known as the uncrowned Queen of Palestine or The Damascus of Palestine as the old city of Nablus is similar to the Old Damascus in Syria. Nablus has the largest and the most known university in the West Bank. Students from all over the West Bank attend the university for its high quality and range of fields such as Medicine, Engineering, Business Studies and many more. As a result, Nablus has become the nest for many famous and successful Palestinian scholars, poets, artists, doctors, engineers and business men/women.

Nablus was established approximately 9000 years ago by the Canaanites. It is 49 km north of Jerusalem and it is the nerve center of the northern West Bank. The city is originally located in the valley between Mount Ebal and Mount Gerizim. As the city was and still is growing, it has started climbing up both mountains. 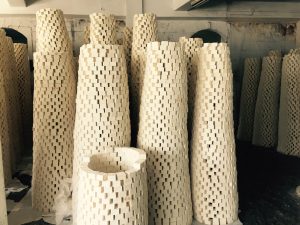 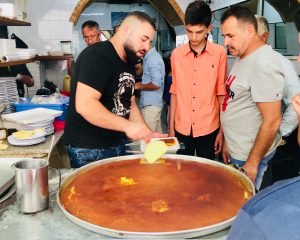 You also like food? You can enjoy a variety of Palestinian and Levant food and sweets. Nablus is also the cheesy desert capital of the world with its famous kunafa. It is a warm sweet and cheese-based pastry topped with pistachios. Make sure to try it once, and I guarantee you that it will become an addiction.

In Nablus, you can see a mosque, church and synagogue within a 15-minute walk. The city has a mixture of Palestinians with different religious backgrounds who live in harmony. 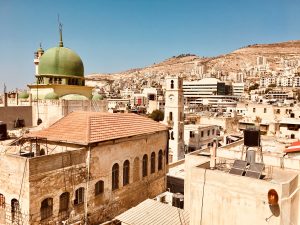 The differences between them are not noticeable. Muslims, Christians, and Samaritan Jews mutually and peacefully share the city and its traditions.

My Name is Waleed and Nablus is my hometown. I went to school and university in Nablus and I currently work for an Arabic technology startup. I associate almost every part of the city with a certain part of my life – whether it was riding a bike for the first time, playing football or meeting up with my first crush. Come and explore Nablus with me and let’s try some kunafa together.