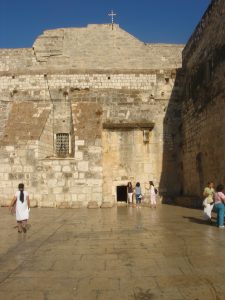 There is a magic feeling when entering the city of Bethlehem – a place  that is so immensely important to Christians, Muslims and Jews alike. Jesus was born here and prophet Mohammed prayed here on his way to Jerusalem. The numerous churches, mosques and century old buildings and places remind one of Bethlehem’s religious and historical significance. 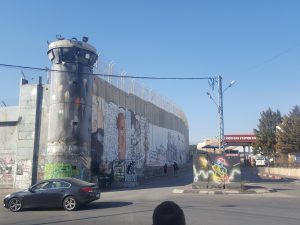 Since 2013, another building shapes the picture of the city like never before – a 8-meter tall and 5km long wall surrounding the city from the rest of the Westbank that is illegally occupied by Israel. Bethlehem is only 10 km away from Jerusalem but getting to Tokyo seems like an easier and more possible task to achieve. The wall separates the Bethlehem people from their heritage and relatives on the other side. It makes every single journey a huge struggle one cannot imagine. 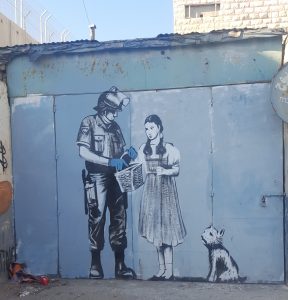 The wall has become a place for many international artists to support Palestinians in raising awareness of their situation under military occupation. One of the most famous artists, who started the movement some years ago, was Banksy. Inspired by the conditions in the refugee camps in Bethlehem, his graffitis are meant to spread the word about the daily suffering of Palestinians to the world, beyond the walls and checkpoints.

In Bethlehem, we work together with our friend Baha. His expertise covers issues facing Palestine and its people related to the social, political and agricultural life of the country. He aims to raise awareness about the implications of Israel's 51-year long military occupation on the people and their lives in the Bethlehem region.

Besides that, should you be craving a true Italian coffee while in Bethlehem, be assured to find out where to go from Baha.