Negotiations between the Palestine Liberation Organization (Yasser Arafat) and the Government of Israel (Ehud Barak), mediated by the United States (Bill Clinton), began on 11th of July 2000 at Camp David, with the aim of reaching an agreement on final status issues. 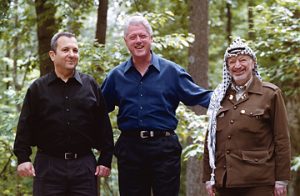 The Summit concluded after two weeks with no agreement reached, Jerusalem and the right of return for Palestinian refugees being the major issues of contention. The US administration began to place the blame for the failure of the Summit on Yasser Arafat.

US President Clinton later proposed a plan, known as the “Clinton Parameters”, which offered guidelines to resolve the final status issues. However, subsequent negotiations in 2001 also did not lead to an agreement between the two parties.