In 1991, the United States and the Soviet Union issued invitations to the Madrid Peace Conference aiming to achieve a just, lasting and comprehensive peace settlement through negotiations between Israel and the Arab states, and between Israel and the Palestinians, based on the United Nations Security Council resolutions 242 (1967) and 338 (1973). Invited states included Israel, Syria, Egypt, Lebanon and Jordan, with Palestinians invited as part of a joint Jordanian-Palestinian delegation. The purpose of the conference was to serve as an opening forum for the participants and had no power to impose solutions or veto agreements. It initiated  negotiations on both bilateral and multilateral tracks that also involved the international community.

The bilateral Israeli–Palestinian negotiations led to a draft peace agreement between Israel and the Palestine Liberation Organization reached in Oslo, Norway. On 9th and 10th of September 1993, Yasser Arafat, Chairman of the Executive Committee of the Palestine Liberation Organization, and Yitzhak Rabin, Prime Minister of Israel, exchanged letters of mutual recognition.

In his letter to Rabin, Arafat recognized “the right of the State of Israel to exist in peace and security”, accepted United Nations Security Council resolution 242 (1967), committed the Palestine Liberation Organization to the Middle East peace process and to a peaceful resolution of the conflict between the two sides. The letter further confirmed that the provisions of the Palestinian National Covenant that deny Israel’s right to exist are inoperative and no longer valid.

In his letter to Arafat, Rabin stated “in response to your letter of September 9, 1993, I wish to confirm to you that, in light of the PLO commitments included in your letter, the Government of Israel has decided to recognize the PLO as the representative of the Palestinian people and commence negotiations with the PLO within the Middle East peace process.”

On 13th of September 1993, the Palestine Liberation Organization, represented by the Secretary General of its Executive Committee, Mahmoud Abbas, and Israel, represented by its Foreign Minister, Shimon Peres, signed the Declaration of Principles (DOP) on Interim Self-Government Arrangements at the White House under the auspices of US President Bill Clinton. 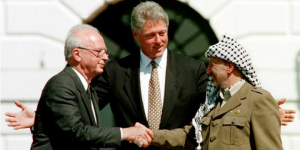 The DOP provided for a transitional period not exceeding five years and the election of a Palestinian Authority Council. Permanent status negotiations on Jerusalem, refugees, settlements, security arrangements, borders, and relations and cooperation with other neighbors were to commence as soon as possible but not later than the beginning of the third year of the transitional period.

Following the signing of the Oslo Agreement, Yasser Arafat, Yitzhak Rabin and Shimon Peres received the Nobel Peace Prize on 26th of October 1994 “for their efforts to create peace in the Middle East”. 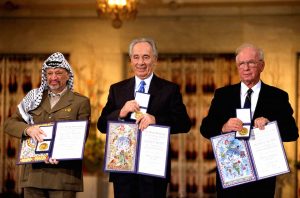 The Palestine Liberation Organization and the Government of Israel signed the Israeli-Palestinian Interim Agreement on the West Bank and the Gaza Strip on 28th of September 1995 in Washington D.C. The Agreement superseded all previous agreements.

Only two months later, on 4th of November 1995, Yitzhak Rabin was assassinated by an Israeli extremist during a peace rally in Tel Aviv.