The backdrop to the uprising known as the First Intifada was the then 20-year Israeli occupation of the Palestinian West Bank, Gaza Strip and East Jerusalem. Israel ruled the Occupied Palestinian Territories with an iron fist, enforcing curfews and conducting raids, arrests, deportations and house demolitions.

After hundreds of Palestinians witnessed the killing of four men when they were run down by an Israeli jeep outside Jabalya refugee camp in Gaza on 8th of December 1987, the indignation felt at their situation was immense. The funerals of those killed were attended by some 10,000 people, but they were forced to mourn once again the following day, when Israeli troops fired aimlessly into a crowd killing 17 people.

As Palestinian leaders gathered to discuss the escalating situation, protests and clashes broke out within the refugee camps, spreading rapidly across the West Bank and East Jerusalem. Palestinians took control of neighbourhoods, barricading roads to prevent Israeli army vehicles from entering. Largely unarmed, they defended themselves only by throwing stones at the soldiers and their tanks. Shopkeepers closed their businesses and labourers refused to go to their workplaces in Israel. 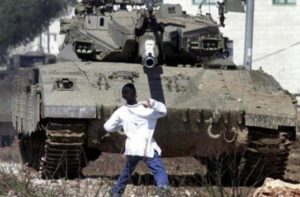 The army defined such acts as “rioting”, and moved aggressively to suppress the protests by firing rubber bullets, live ammunition and tear gas canisters into the crowds. The protests grew larger, involving tens of thousands of people. By 12th of December 1987, six Palestinians had been killed and 30 had been injured in the violence.

As the protests showed no signs of dissipating, Israel used mass arrests to try to dissuade people from taking part. Universities and schools in the West Bank were closed. Palestinian farms and homes were razed, trees were uprooted and protestors who refused to pay taxes had their properties and building licences seized. In the first year alone, 300 Palestinians were killed, 20,000 had been injured and some 5,500 were detained by Israel, according to the UN Relief and Works Agency for Palestine Refugees (UNRWA). The Swedish branch of Save the Children estimated that 23.600 to 29.900 children required medical treatment for their beating injuries in the first two years of the Intifada; one third were under the age of ten. 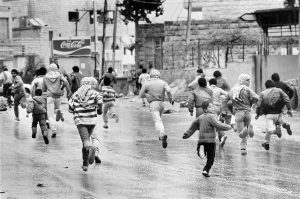 On 14th of December 1987,  a communiqué on the establishment of the Islamic Resistance Movement, “Hamas”, was distributed in the Gaza Strip. After unsuccessful attempts of the PLO to rein in the violence and work with the United Nations, Hamas emerged in the Gaza Strip calling on the Palestinians to abide by the basic goals of their national struggle, above else the liberation of Palestine

After the late King Hussein of Jordan cut all administrative and economic ties with the West Bank on 31st of July 1988, the statelessness of the Palestinians was once again thrown into sharp relief. As the bloodshed continued, calls for an independent Palestinian state grew stronger.

Later in the year on 12th of November 1988, the Palestinian National Council adopted the Declaration of the State of Palestine (Declaration of Independence). In addition, at a press conference in Geneva on 14th of December 1988, following his address to the United Nations General Assembly, Yasser Arafat accepted UN General Assembly resolution 181 (1947 – Partition Plan) and UN Security Council resolution 242 (1967) as a basis for negotiation with Israel. He recognized the rights of all parties in the Middle East conflict to exist in peace and security, including the State of Palestine and Israel, and renounced all forms of terrorism including individual, group and state terrorism.

However, the violence continued and in 1989 at least 285 Palestinians were killed by the Israeli security forces, while an additional 17 were killed by Jewish settlers. In the same period, 19 Israeli civilians and six members of the Israel Defence Forces (IDF) were killed by Palestinians. From 1989 to 1990, the United States continually vetoed UN Security Council draft resolutions that  deplored Israel for its human rights abuses and non-compliance with the Fourth Geneva Convention.

By the end of the Intifada in 1993, almost 1,500 Palestinians and 185 Israelis had been killed; more than 120,000 Palestinians had been arrested. The hugely disproportionate violence and casualties on the Palestinian side provoked widespread international condemnation which influenced the United Nations Security Council to draft resolutions 607 and 608, demanding Israel to stop deporting Palestinians from their land.