On the 17th of September 1978, Egyptian President Mohammad Anwar Al-Sadat and Israeli Prime Minister Menachem Begin, under the auspices of US President Jimmy Carter, signed the Camp David Accords: the “Framework for Peace in the Middle East” and the “Framework for the Conclusion of a Peace Treaty between Egypt and Israel”; exchanged letters on Jerusalem, the Israeli withdrawal from the Sinai Peninsula and the implementation of a comprehensive settlement. 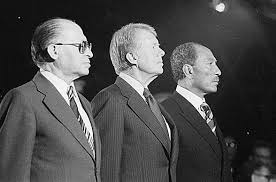 The first Accord provided for the establishment of a transitional Palestinian self-governing authority in the West Bank and the Gaza Strip for a period not exceeding five years (replacing the Israeli military government). Not later than the third year, negotiations on the basis of the UN Security Council resolution 242 were to begin, to determine the final status of the West Bank and the Gaza Strip. The legitimate rights of the Palestinians and their requirements were to be recognized.

Despite these Accords, the Israeli parliament (Knesset) passed a “Basic Law” in 1980 declaring that “Jerusalem, complete and united, is the capital of Israel”. The United Nations Security Council rejected this law, and no country recognized this illegal action. UN resolution 478 affirmed that the law would constitute a violation of international law and the Geneva Convention and that all actions and measures taken by Israel, the occupying power, would be null and void.