The Arab-Israeli war (also known as the Six-Day War) of June 1967 brought immediate and direct repercussions on the Palestine question. Within only a few hours, Israel launched strikes against the air forces of Egypt, Jordan and Syria. Without any opposing air forces left, Israel was able to defeat the three countries on the ground leveraging its military superiority. After six days, Israel occupied the remainder of mandated Palestine – the West Bank including East Jerusalem and the Gaza Strip – as well as the Sinai Peninsula of Egypt and the Golan Heights of Syria. 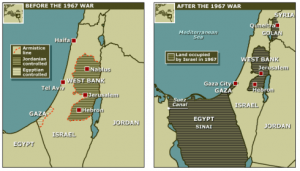 The defeat of 1967, known as “Al-Naksa”, created a great wave of displacement from the West Bank and the Gaza Strip. 200.000 Palestinians were made refugees fleeing to neighbouring Arab countries – many for the second time, having sought refuge in the West Bank and the Gaza Strip during the first exodus of 1948. As a result, the overall number of refugees increased to 1,5 million. 900.000 Palestinians, who stayed in the West Bank and the Gaza Strip after 1967, came to form a new category – people under foreign military occupation, subject to military rule, its repercussions and its consequences for the suppression of civil liberties and rights. This military occupation is still in place today. Only 300.000 Palestinians remained in the State of Israel.

Immediately after the cease-fire of the Six-Day War, the Security Council passed resolutions 237 and 242. The intent was to establish a framework for peace, specifically by requesting Israel to withdraw from all territories occupied during the Six-Day War and allowing all refugees to return to these territories. But, both missed to mention Palestine and reduced the issue of Palestine to “the refugee problem”. Syria and Iraq denied the resolutions, while Egypt and Jordan demanded Israeli withdrawal from all territories occupied in the Six-Day War as a pre-condition to any negotiations. Israel refused claiming that withdrawals, refugees and other issues could only be settled through direct negotiations with the Arab States and the conclusion of a comprehensive peace treaty.