The United Nations partition resolution did not provide a solution to the Palestine problem, and violence increased. With events moving towards a major armed confrontation, Great Britain announced that it would terminate the Mandate on 15 May 1948, several months before it was planned according to the United Nations plan. As the British Government progressively disengaged from Palestine, and the United Nations was unable to replace it as an effective governing authority, the Zionist movement moved to establish control over the territory of the nascent Jewish State. From writings of Zionist leaders, it is evident that Zionist policy was to occupy, during the period of Great Britain’s withdrawal, as much territory as possible (including the “West Bank”) beyond the boundaries assigned to the Jewish State by UN resolution 181.

This territorial expansion by the use of force resulted in a large-scale exodus of Arab Palestinians from the areas of hostilities. This was part of a deliberate policy to displace Palestinian Arabs to make room for immigrants as indicated by the Zionist leader Herzl:

“We shall try to spirit the penniless population across the border by procuring employment for it in the transit countries, while denying it any employment in our own country.”

Terrorizing the civilian population through military or psychological means was an integral part of this policy of expelling Palestinians, which became evident in Zionist writings:

“… Between ourselves it must be clear that there is no room for both peoples together in this country … We shall not achieve our goal of being an independent people with the Arabs in this small country. The only solution is a Palestine, at least western Palestine (west of the Jordan river) without Arabs … And there is no other way than to transfer the Arabs from here to the neighbouring countries, to transfer all of them; not one village, not one tribe, should be left … Only after this transfer will the country be able to absorb the millions of our own brethren. There is no other way out.” 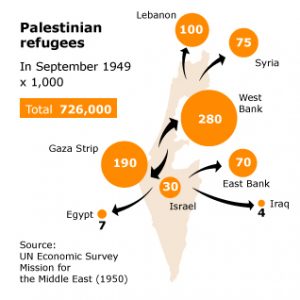 The worst example of Israeli terror was Deir Yassin, a Palestinian village in the West of Jerusalem. Israeli’s terror groups Irgun and Stern, stormed the village on 9th of April 1948 to massacre its 107 inhabitants, including women, children and elderly. For many, this brutal murder triggered Palestinians elsewhere in the country to flee from their homes out of fear.

As the hostilities in Palestine escalated, efforts intensified in the United Nations to find ways to stop the violence. A United States proposal to place Palestine under temporary United Nations trusteeship met strong opposition from Zionist leaders, who saw in it a possibility of a reversal of the partition decision. On the risk of retreating during a planned UN General Assembly meeting on 15 May 1948, Israel simply declared its independence on 14 May 1948 while Great Britain ended its Mandate on 15 May 1948.

On the termination of the British Mandate, Jewish forces moved to occupy further territory beyond the boundaries specified by the UN Partition resolution 181. They occupied key cities and areas in the territory designated for the Arab State, including the majority of Jerusalem.

As a result of this territorial invasion, the Arab League informed the United Nations to move its forces into Palestine in order to help the Palestinian Arabs to secure their rightful independence given the end of the British Mandate over Palestine, as recognized by the Covenant of the League of Nations as well as the United Nations Charter.

The fighting between the Arab forces and the Israeli forces escalated into the first Arab-Israeli War. The Israeli forces were well manned and equipped and they were able to crush the intervention of the Arab states and occupy most of the territory of Palestine. The only exception being the West Bank and the Gaza Strip, which were subsequently held by the Arab Legion from Jordan and the Egyptian forces respectively. Armistice Agreements were signed between Israel with Egypt and Jordan in 1949 to agree on the borders between the countries. As a result of these agreements, Israel was now in control of 78% of the entire territory of Palestine.

The United Nations by 1948 had been inextricably involved in the Palestine question given its decision and inability to govern the territory in Palestine temporarily after the withdrawal of the British troops. Facing an ongoing threat to peace and stability, the Security Council ordered a cease-fire on 29 May 1948. Following several unsuccessful proposals on territorial adjustments, the UN General Assembly passed resolution 194 on 11 December 1948 , which has become an important document in the Palestine question ever since. The resolution calls for:

“… the refugees wishing to return to their homes and live at peace with their neighbours should be permitted to do so at the earliest practicable date, and that compensation should be paid for the property of those choosing not to return and for loss of or damage to property which, under principles of international law or in equity, should be made good by the Governments or authorities responsible …”

The importance of this resolution derives principally from its specific establishment of the right of peaceful return of the Palestinians to their homes (a right that has been reiterated annually by the General Assembly up to the present time).