In order to solve the worsening conflict in Palestine, the British Government presented three Partition Plans to both parties. All of them were rejected. Subsequent discussions also did not lead to any solution. Faced with this situation, Great Britain decided to give up its mandatory role and pass the Palestine problem to the United Nations.

In accordance with the Charter of the United Nations and the previous Covenant of the League of Nations, the Palestinian Arabs as the majority in Palestine had the right for self-determination and the right to create a free and independent state; just like all other surrounding Arab countries were granted in the years before.

But, the United Nations decided differently and instead created the United Nations Special Committee on Palestine (UNSCOP) to assemble and analyse all pertinent data and hear different perspectives on the “question of Palestine” and present to the General Assembly proposals for the solution of the problem. Despite strong protests from Arab nations, the UNSCOP Charter did not contain any reference to an independent Palestinian State. As a result, the case for the recognition of the right of the Palestinian Arabs was lost.

Following months-long discussions with the Jewish Agency and the Arab League, the Special Committee consisting of 10 countries were unable to agree on an unanimous proposal to the General Assembly – the majority favored the partition of Palestine into two politically separate and independent states while the minority supported an independent Palestine as a federate state. Both plans were presented to the General Assembly in September 1947.

Reactions to the different recommendations by the Special Committee appeared, along predictable lines, even before the General Assembly met. The Palestinian Arab Higher Committee condemned the Partition Plan as an injustice to Palestinians and reaffirmed its position of their right for self-determination for independence as laid out by the Charter of the United Nations. In addition, it stressed that the raison d’être of the United Nations was to assist Palestinian self-defence against Zionist aggression, but the opposite was evident due to an ever-increasing influence of Zionism in other countries. In contrast, the Zionist Organization approved of the Partition Plan although objecting that the Jewish state had not been allotted sufficient territory.

After subsequent meetings and negotiations of additional sub-committees and committees, the Partition of Palestine was voted on in the General Assembly on 27 November 1947. The vote received 33 votes in favour and 13 votes against with 10 abstentions after substantial pressure was exercised by the USA and USSR to secure the 2/3 majority.

The Arab States, as well as several others, declared that they would not consider themselves bound by the General Assembly recommendation since they considered that it was contrary to the United Nations Charter and it was not the United Nations responsibility to vote on the fate of a country. Others voiced apprehension over the future implications of the vote to partition Palestine.

According to United Nations resolution 181, Palestine was to be divided into an un-named “Jewish State” and un-named “Arab State”. Great Britain as the Mandatory Power was to withdraw its presence by 1 August 1948 and make available a seaport until 1 February 1948 to facilitate “substantial Jewish immigration”. Power was to be handed over to both States on the day of independence, not later than 1 October 1948. The two states were to be linked in an economic union. 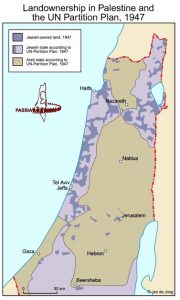 The territory of Palestine was divided into eight parts. Three were allotted to the Jewish State comprising 56,47% of the land. Three were allotted to the Arab State plus Jaffa as the seventh part as an Arab enclave in Jewish territory, together comprising 42,88% of the land. The eighth part was to be Jerusalem as a corpus separatum under a special international regime comprising 0,65% of the land. At the time of the Partition Plan, Arabs made up 67,1% of the population and Jewish migrants made up 32,9% of the population.