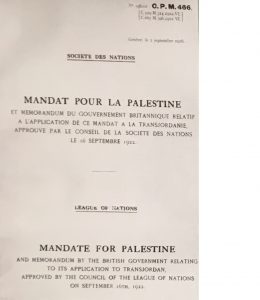 As a result, the Palestinian right for self-determination and independence was not met. This was further confirmed by a policy statement of the British government, known as the “Churchill White Paper”, which was issued as a response to numerous protests by Palestinians following the start of the British Mandate and the Balfour Declaration. On the one hand, the White Paper affirmed that there was no intention to provide for the “disappearance or the subordination of the Arabic population, language or culture in Palestine”. It stated that “the status of all citizens of Palestine in the eyes of the law shall be Palestinian, and it has never been intended that they, or any section of them, should possess any other juridicial status.” But on the other hand, the White Paper made clear that promises given to the Arabs with regard to their independence excluded the territory of Palestine.

During the period of its mandate, the British allowed large-scale Jewish immigration (“First to Fifth Aliya”) to Palestine – 100.000 Jews in the 1920s and additional 232.000 Jews in the 1930s. Palestinian resentment against the denial of their inherent right of self-determination, and against the colonization of their land by Zionist Jews, manifested itself in a series of outbreaks of violence on both sides which mounted in intensity as the Mandate prolonged.

On 25th of April 1936, the Arab Higher Committee was established. The Committee included delegates from all Palestinian political parties, areas, and clans, and became the political representative of the Palestinian people. One of its first actions was to call for a general strike lasting 6 months to increase the pressure on the British.

On 17th of May 1939, the British Secretary of State for the Colonies Malcolm Macdonald issued the White Paper of 1939. It clarified Great Britain’s policy in Palestine after the Jewish population would reach 450.000: conditional independence of a Palestinian state in ten years; restricting Jewish immigration to Palestine to 15.000 annually for five years; and protecting Palestinian property rights from Zionist acquisition. By 1946 and after World War II, the Jewish population had increased to 543.000 people, which was equivalent to roughly 30% of the entire population in Palestine.