On the 28th of July 1914, the First World War erupts between the Central Powers of Germany, the Austria-Hungary Empire and the Ottoman Empire against the Allied Powers of France, Britain and the Russian Empire.

After their victory against the Central Powers, Great Britain and France, with the assent of the Russia Empire, secretly signed the Sykes-Picot Agreement to designate spheres of influence and direct control in the Middle East. France took control over Syria and Lebanon and Great Britain over Transjordan and Mesopotamia (Iraq). Taking into account the presence of places sacred to the three monotheistic religions, Palestine came under “international administration”. 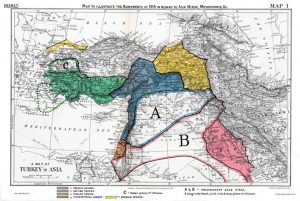 The Convenant of the League of Nations, embodied in the Treaty of Versailles, took effect on the 10th of January 1920. Article 22 of the Covenant created the mandate system: the legal status of territories transferred from the control of one country to another country following World War I. The Covenant specified that all territories under British, French and international mandate were to be treated as “class A” mandates meaning their existence as independent nations could be provisionally recognized. As a result, Iraq (in 1932), Lebanon (in 1943), Syria (in 1944) and Jordan (in 1946) obtained formal independence from the Mandatory Powers with approval by the League of Nations.

Only in the case of Palestine, independence was not granted despite it also being classified as a “class A” mandate in the Covenant of the League of Nations. The contradictions inherent in Palestine arose from the Balfour Declaration.

The Balfour Declaration was a letter sent from the British Foreign Secretary, Arthur Balfour, to the British Zionist, Lord Rothschild, on 2nd of November 1917. In it the British cabinet, headed by Prime Minister David Lloyd George, pledged to establish a homeland for the Jews in Palestine. 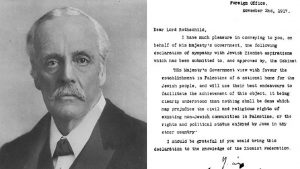 Faced with this determined effort concerted between Great Britain and a Jewish organization that had shown its strength and influence, the Palestinian people refused to accept the scheme and protested against the policy to establish a “Jewish National Home” in Palestine. They requested the immediate creation of a national government with a parliament consisting of elected members from the entire population, including Christians, Jews and Muslims.

It is important to note that the struggle of the Arabs of Palestine against Zionism had nothing in common with anti-Semitism. The Arab world was a rare haven of refuge for the Jews in all Arabic countries, including Palestine, until the atmosphere of neighbourliness had been poisoned by the Balfour Declaration.