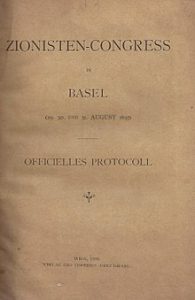 The World Zionist Organization was founded by Theodor Herzl in Basel. Its first action was to approve the Basel Declaration which described the Zionists’ ultimate goal to establish and secure a homeland for the Jewish people under public law. It was to be located in Palestine or also referred to as “The Holy Land”. In 1901, the World Zionist Organization founded the Jewish National Fund (JNF) in order to acquire land in Palestine.